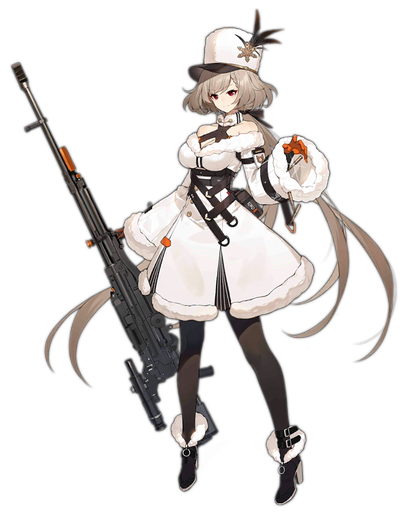 She has extremely high firepower that gets reduced by her skill, with the lowest accuracy of any 5 star MG, and a mere 9 round base capacity. What you get in exchange for this is an amazing two-part skill that provides piercing without any stupid strings or conditions to start. Yes, her AP values drop, yes her FP is reduced by the skill, but this won't matter in most contexts where you'd actually want her. You start the fight with piercing and have the option to go into a single target mode that ups her acc and firepower.

Now, her stats in single target mode don't seem exceptional, but they're more than enough for general work to get her to the battles where she would be good (assuming there are any for that map, this is still on you to get her to those), and also she has the benefit of it working from the get-go without any timing issues.

Like anything with piercing you need to position her properly, or else you waste everything. This is super important because piercing is basically the entire reason you use her to begin with, so make sure you look at what formations the enemy actually has first and position her based on that. Seriously. if you're tryhard enough to use her but not tryhard enough to figure out your enemy? You're probably retarded. Don't be that guy.

Basically you want her shooting through or across enemies, such that you get as many hitbox contacts as possible.