Machine Guns And You

Unlike rifle echelons, which come in many forms, MG echelons are relatively straightforward: They mow down enemies. Ideally really quickly, because they have limited magazine sizes and are sitting ducks while they reload.

On paper, there's many different skill classes that could, in theory, allow to differentiate various echelon types. But in practice, the prohibitively high cost of rolling for, and deploying MG echelons means they're all but limited to some ranking maps, a handful of fights tailored to them (and even there ARs can work for most fights, as long as you bring armoured units – and with M16A1 and M4A1mod3, you don't even need shotguns), and for "I absolutely hate every single fight on this map and don't care about costs, make it go away".

As such, you're likely not going to be levelling, much less deploying, more than a few MG echelons for now. And with the enemies we have now, the only relevant MGs on EN are those that front-load all their DPS and skills on the first magazine. This should be enough to delete enemy echelons before a reload is needed, or at the very least deplete them so severely that the rest cannot do significant damage. Minimizing hits also means that for SGs, the most relevant stat is armour, as this determines how much damage they can absorb (per hit) before their HP suffer.

Later on, other enemy formations we don't yet have will call for different MG skills to be deployed against them (mostly armour buffers), but the best MGs for these roles aren't available to EN yet either, so there's no point in preparing for it yet.

Their skills are always active, and as such, always useful, even on the first shot. This makes MGs with these skills the big four – M2HB, PKP, PK, and MG5 on EN. For MG echelons, you will want as many dupes of these as possible. (Though the composition of what are the "big four" changes as digimind evolution becomes available, making e.g. BAR viable.)

have skills that are… not great for the most part, but at least they activate on the first magazine, and autocritting allows some interesting equipment setups. The usual recommendation is LWMMG, M1919A4 and Mk48. These can be used as fillers to substitute better MGs in a pinch, but should be replaced with better ones as soon as possible. (Which normally isn't very soon, given their drop rates…) FG42 technically also shares their skill, but her stats are just too awful.

MGs with skill cooldowns of 8+ seconds are mostly irrelevant to EN – their performance on the first magazine (the one that should end the battle) is usually worse or equal to LWMMG's, making them not worth the effort of raising them:

As long as your MGs have enough accuracy to hit (ballpark: enemy evasion * 2 to 3), crit scopes will bring the best DPS. Failing that, EOTechs or ITIs, whichever bumps up your accuracy enough.

Shotguns generally want armour and accuracy scopes, since otherwise they can't hit the broad side of a barn. That leaves the ammo slot:

As for formations, there's not many, and you will mostly deploy them in T or K layouts: 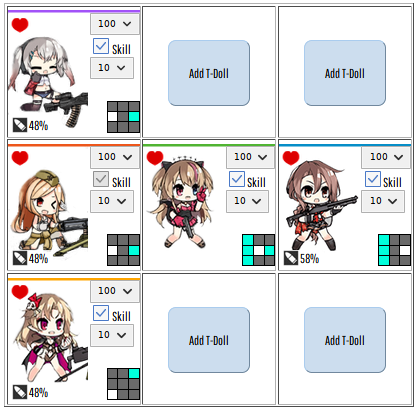 The most basic bitch MG echelon, you might as well call it a 0331. T formation lets you maximize the buffs you get from the average SG and damage-buffing HG; with none of them providing a significant armour buff, wasting the MG buffs isn't a big deal either. The Big 4 have more complementary buff tiles that let you maximize them better. 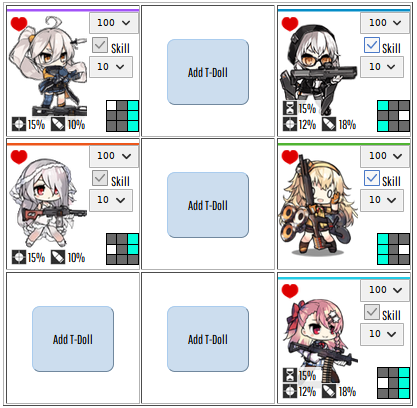 EN's first viable 2SG use case: This weird looking setup is what you want against Judge; she'll send two streams of attacks against 9 and 6, which get tanked by your SGs, and also randomly attacks 1245 or 4578 with DoT stacks. This leaves Negev (or whoever your hardest-hitting MG is otherwise) completely unharmed; the other MGs can assist her until they soaked up enough damage (ca. one link worth, if you want to S-rank the fight), then have to be retreated.

Alternatively, you can put Negev on 4 (so she can buff the SGs) and move her to the front at the start of the fight, she shouldn't take too much DoT damage that way with the Judge incarnations EN has currently.