Rifles And You (Revisited)

Rifle+Handgun (RFHG) echelons are mainly used to fight armoured enemies, especially at night. Additionally, they can deal with backline-heavy enemy formations much better than ARSMG echelons, thanks to their innate backline targeting.

Rifles are damage dealers, as are ARs and MGs. They deliver continuous DPS, like ARs, but with a few significant differences:

Their skills fall in two broad and a few smaller sub categories:

Rifles underwent significant changes over the course of the game's development; in late 2019 EN received an update that made bamboo rifles (see below) a whole lot more useful; additionally, we will receive a second buff to AP with Isomer (raising the maximum ammo AP value from 120 to 180), in addition to a smaller one last year that buffed base AP from 10 to 15. Old guides are thus not necessarily applicable, and future patches might change the balancing again, so take all advice with a grain of salt.

These most often come as pure RoF buffing, or pure firepower buffing rifles, though some buff both. There is no clear advantage to either:

Which one you want depends on what kind of enemy formations you're facing. Both types tend to be reasonably good generalists when neither swarms nor heavy armour is an issue, and R93 manages to strike the balance and can be used in either role extremely well (…unlike Mk12, RIP).

However, both types will struggle against evasive enemies at night; even the ones that self-buff their accuracy cannot overcome the night debuff unless you bring several acc-buffing handguns and something like an Illumination or Fireworks fairy, and the rest will struggle even with all this help. For those fights, you want skill shot rifles – most skill shots ignore accuracy and always hit. An exception is Type 4, whose passive autohits some of her shots. YMMV if that's enough.

Speaking of night combat, a special case are night self-buffers. While their skills have high buffs at night, at day they're useless, and their extremely high ICD makes most of them awful at night as well. G43 is somewhat of an exception by virtue of having excellent stats for a 2* rifle, making her useful early in the game. Type 88 can also be useful, but only modded.

These underwent a lot of changes since EN's release. Starting out as borderline useless, changes in how their skills work, new rifles with even more different skills mechanics, and new enemy factions (especially Paradeus/White Faction) made them much more useful than before.

Bamboos notably had their skills reworked in late 2019 to add the charge mechanic. Before, they were borderline useless – their cooldown is so slow it's only really worth bothering in boss fights, but they're sitting ducks against boss skill attacks, so you need to buff them to the point that they can end the fight in one single salvo. On CN/KR/TW this was a good trade off, as those servers had to farm bosses for limited drops. EN never had to suffer through this and could farm everything off regular enemies, making bamboos useless – by the time you learned how to use bamboos correctly against a particular boss, you had the boss killed with ARSMG echelons five times over. This use (murdering bosses over and over again) is also where "bamboo" nickname comes from, both are improvised weapons that can do well, but you'd rather use something proper if you can.

All of this changed when the White Faction attacked… oh yeah, and the skills got reworked. Paradeus has a bunch of annoying enemies like Dopplesodner Doppelsöldner Duplicarius GUNDAMS whose timing tends to be just right that a skill shot from Kar98k or a bamboo can end them before they become a threat. Since skill shots also cannot miss, they're also immensely useful against evasive armoured enemies at night. M200 takes the cake by getting off 6-7 skill shots in one activation period, which makes her close to an universalist.

As their main attraction is their skill shot, RoF buffs are more or less useless on them, they help with their regular attacks, but might leave their skill shots underpowered, which renders them useless. With some exceptions, their shots also don't crit, making the usual crit focused builds suboptimal as well.

This combined makes them somewhat niche – their base DPS isn't too impressive, even M200 lags somewhat behind the self-buffers against regular enemies –, but it's a niche that keeps cropping up regularly in current and upcoming content.

MICA has experimented a lot with rifle skills… usually unsuccessfully. A lot them have weird skills that sound like they could be useful, but in the end aren't. Exceptions:

Due to their synergy effects, you will mostly pair rifles with handguns:

RFHG echelons are quite stereotypical glass tanks – dishing out lots of damage, while not being able to handle taking much. This is fine for about 90%, if not more, of the fights you want rifles in, as you can typically make your echelons strong enough that you'll only take chip damage at worst.

There is some exceptions where no possible build can kill enemies fast enough (especially when underlevelled, or in theatre/ranking maps designed to be too beefy for this approach), but they're rare enough that it's worth tailoring specific echelons for them. Whether you want shotguns or SMGs for these few cases depends on the enemies  in question, there's no generalist solution to this.

If you're early in the game and just need an echelon that can clear the first 2-3 chapters of night combat, you honestly don't need to worry much about synergy – grab your M14 and pre-levelled Springfield, your pre-levelled SAA, and as many SMGs as you need to let them survive.

Once you're at the point where you have at least 1-2 maxed out echelons and can take time to focus on leveling proper line-ups, your first priority should be a proper self-buffer echelon, Springfield falls off quickly. YMMV whether to go with a RoF/FP/Mixed echelon, build whichever you have the best rifles available for.

Example formations for both are up in their respective sections; to determine which of your available handgun+RF combos give the best results, plug them into the combat simulator, and look at the relevant stats:

ARSMGs tend to use 3 ARs to 2 SMGS, but RFHGs tend to use 2 RF to 3 HGs. There are multiple reasons why people don't run 3RFs, ranging from minor nitpicks to unscalable walls. Starting from the weakest nitpick, we have:

Before the skill rework, the only notable exception was using both Canos plus either Kar 98k or M82A1, to handle White Faction fights. With the skill rework, this is obsolete now (one Cano buffing is enough, and usually you need neither), leaving us with about zero use cases for 3RF formations.

There's two obvious options, both have their advantages:

YMMV which works out best for you. Usually, either will do, if you struggle with particular enemies, rebuild your echelon to handle their shtick.

These mostly use one pure RoF buffer and one firepower buffer, plus one auxiliary handgun that ideally also buffs RoF for one of them.

Beware the handgun placement: Welrod is used to buff WA's RoF to the point that she doesn't shoot on the same frame as SVD. Swapping the two or replacing Welrod with Px4 is only recommended when corpse whipping won't be an issue.

If you don't have anything specific in mind, RoF buffs is the name of the game. Your fairy will be giving additional firepower buffs anyway, so for the common use case, you want RoF handguns to correct that deficit. As none of them will get close to cap, you're more flexible in your HG selections.

RoF overlap still needs to be kept in mind, but the easiest fix for this is to simply use M14, she's one of the best FP-selfbuffers and has by far the highest RoF and will end up firing on different frames in almost all pairings. IWS is a good alternative, her RoF debuff will lead to the same result with the opposite approach. (Editor's note: Insert horseshoe theory joke here.) 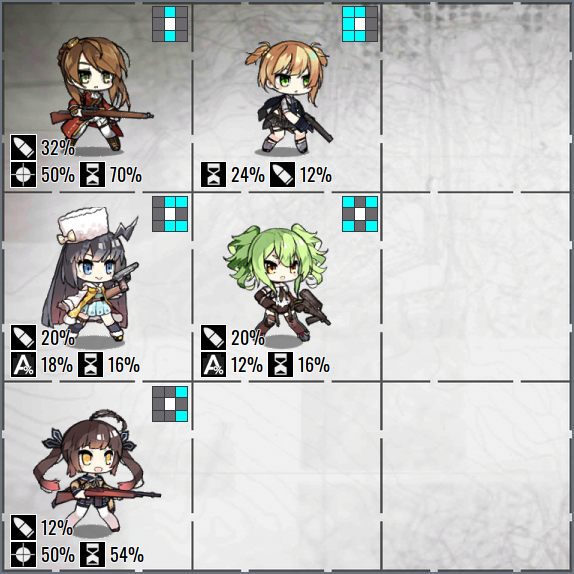 Depending on handgun availability, you probably want to swap Welrod for Px4 and Stechkin for 5-7. Dead enemies don't need tanking.

As you still don't want to exceed the RoF cap on your RoF rifle, your handgun selection is more restricted, while your rifle selection is wider. Typically, you'll want one RoF selfbuffer, plus handguns buffing whatever else you need. Px4 + 5-7 , solve for P is a common combo to max out your crit damage and give decent RoF buffs, for the last slot you're likely going to want a firepower buffer or some utility (shielder, e.g.). 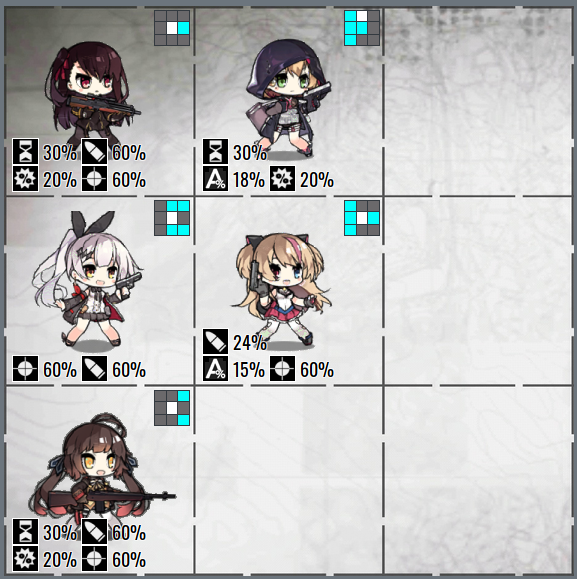