New collab! Yay. This time we get the Division and more evidence that 416 is, in fact, a bitch. This collab will feature some insanely strong enemies, but it also comes with consumable items that you can farm that makes it very easy to complete, even on EX. Like, so easy a brand new account could clear this just fine. It'd suck, but it could clear it. That being said, if you can clear the enemies without the use of those consumables, you can entirely forego farming for them.

So...what are these consumables?

First, we got the grenade.

Grenades are pretty simple. Throwing them at an enemy will lower their HP. Throwing enough of them will actually kill the enemy outright, so it's possible to kill most of the enemies in the collab using them. Note that grenades have two options on use. One will chuck one grenade, the other will chuck enough grenades to kill the enemy. The amount changes depending on the difficulty, with 10 being used on normal and 20 being used on EX. Do note that you absolutely need the amount of grenades (10/20) for that option to appear. It will show up below the option to use the turrets. It's also the most important option for you to abuse. One thing to understand is that in these guides I will abuse the ever living fuck out of these, since they make things much easier for most players to handle the fairly difficult enemies on EX.

These aren't like the flashbangs our T-Dolls have. Throwing them at an enemy will lower their accuracy by 70%. Enemies doing normal shots to you will have close to zero accuracy after using one. This doesn't help against enemies with skills like molotovs or skillshots, but it makes a lot of fights easier.

Lastly, we have turrets.

These turrets function similarly to grenades, but will damage enemies that step on them as well as adjacent enemies. The effect of these turrets is much higher than grenades, at the cost of being stationary. They also work on all enemies within the collab, so the enemies you can't kill with grenades can be weakened with these. Do note that if they get stepped on, the turret will explode. They also only last for two turns.

Using these consumables are fairly simple. You'll get a wheel of options on the left side of your screen similar to when you access consoles. You can choose what consumable you want to use, then how you'll use them.

Be smart with your consumables, since you'll have to farm extra if you run out. Turrets in particular are the most annoying to farm, with grenades being the easiest. If you play with these correctly, the collab should be a breeze.

This was originally introduced in Dual Randomness. Now, some maps will start without the entire map visible. You'll typically see nodes with pathways off of them trailing into the void, which is the hint that there's more to the map. 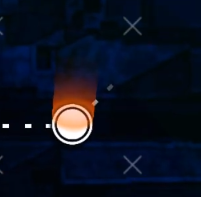 You can also sometimes get more map unveiled by clearing a current map objective. This typically also accompanies an update to the map's objective to something else. It WILL tell you if it does update. There's one annoying bit though. SOME maps have nodes that unveil new parts of the map that have zero indication that they'll do that. Be sure to look for nodes that are weird dead-ends, as this can be a sign that it may unveil more of the map. Not all maps will have this, but it's just something to keep in mind.

Now we get to deal with multiple layers in a single map! All this does, really, is just expands the size of the playing field that we need to deal with. The main important thing is moving between layers. For viewing different layers, we get this button here

to switch between layers of the map. The real shit though, is trying to move echelons between the map layers. You have two options for that. Deploy echelons to a specific layer, and if you need to move it, just retreat and redeploy. Or you could find the node that will transport you between layers. This is usually marked in some way, like on a node, but sometimes it can be hidden, so do keep that in mind. Typically it'll follow the map unveiling conventions, so just keep that mechanic in mind while thinking about this one.

This mechanic is...nothing special really. It is what it says on the tin. We can now move friendly NPC echelons as if they were our own echelons. These sometimes have limited ammo/MREs, just like our echelons, but sometimes they just have infinite supplies to work with. Yes, moving them costs AP. Be sure to remember that.

Just as a forewarning, I will only cover one of the possible clears of the map. There's no reason to do multiple. I will also leave the final objective of the map, since now the maps can have objectives that change over the course of the map clear.

TL;DR if you're too lazy to look at the farming page:

Farm grenades and flashbangs on map 1 EX. Do daily clears on 4.1 infinity. Any dolls you want should be farmed on their specific infinity maps.