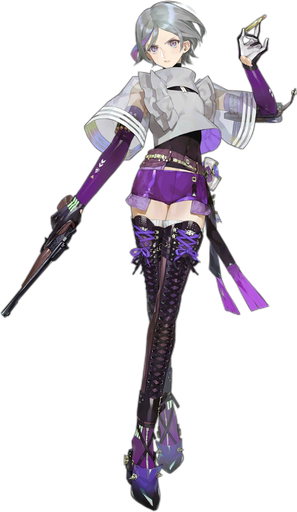 She has some of the highest damage and crit buffs in the game, with the best possible tiles ("All around her"), and her skill allows her to override the targeting logic of most other dolls¹, making them focus their fire some, very unlucky fucker (boss if present, otherwise furthest/highest HP/nearest enemy, depending on whether Contender is back/middle/front row). Oh and the skill doesn't wait until impact - the bonuses kicks in as soon as the shot leaves the muzzle. She also can equip AP ammo, which doesn't come up much, but there's a few fights later where this is immensely valuable and if you're using a HG vs armour at night, well... you know. Did I mention she has 40% base crit? She does.

Kiritsugu has good taste, is what I'm saying. Immensely versatile. A staple in Bamboo formations, MG formations that also want more crit, RF formations that don't need all the RoF... almost anything can use her buffs really. One downside to her skill is that, it only works on damage boosting vs ONE target, which will probably be dead in short order, rather than overall DPS. Still though, its hard NOT to like this gun.

If you are planning on using any form of HG buffs, use someone else unless if you are figthing a boss. Different story if you are fighting bosses as 40% extra damage IS a lot.