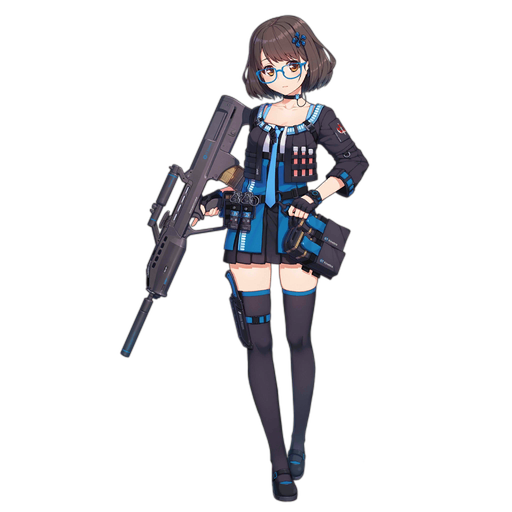 Wife of everyone from National Service according to your encik. Terras make her cute, but how come like Airline waitress instead of battle standard leh? Wish they make her look more garang.

Someone at Mica damn siao and give her same skill as Aug. Slowest rof service rifle become machinegun wat. She think she ultimax lor. Osso make her manmode, debuff self acc and target become random every shot. At lvl10 no more acc debuff but still say she have (because coding is liddat), but is ok since it actually 0. (still look damn stupid sia). Like AUG but with 4 star stat, and tile buff for smg only (though is not bad). If Aug already have, is not as important unless want more of her skill leh.

Look at detailed entry on AUG for more info.

Dusk will provide a translation for the Singlish here later, though its deliberately kept light anyway so even angmoh can understand

Singapore was a mistake. Even lower firepower than AUG, so same issues with armoured enemies as her.

Don't be liddat ah, orredy make it very mild so everybody understand

"According to the sergeant for Singapore's National Military Service, this gun is your wife. The artist made her look cute, but why does she looks like an airline waitress and is not wearing the military standard? Wish they made her look more powerful.

Also someone at Mica is crazy, to give her the same skill as AUG. Her rate of fire is lowest but in GFL she is a machine gun? She thinks she's the Ultimax. Her skill activates her "manmode", reducing her own ACC but makes her change targets after every attack. At lvl10, her ACC debuff is removed but the game still lists it (because of how code works), but it's ok because it's actually 0% (but it still looks stupid). She's like AUG but with 4 star stats, and unlike AUG her tile buffs are for SMGs only. If you already have AUG, she isn't as important unless if you think you need another AR with AUG's skill."

("Manmode" - A Singaporean National Military Service term/word/joke for "puts on helmet, cannot see or hear anything")

Huh. I did better than I thought I would.

Unfortunately, she is worse than she seems. Despite being a 4*, her stats skew towards the lower end (close to G36), and the stat difference between her and AUG makes her seem like a 3*. AUG has 55 FP and SAR has 44. AUG has 57 ACC and SAR has 46. SAR does win with 5 ROF but that doesn't matter when their skill is active (which should be half or most of the time in battle). However, if you do not have AUG, she does fill in that niche finely. Read AUG's entry if you want to read up on what that niche is.

To be honest, if you know you are fighting Tank + Soft backline combos only, you can potentially use a AUG + SAR lineup for much fun (or you can just use a RFHG).