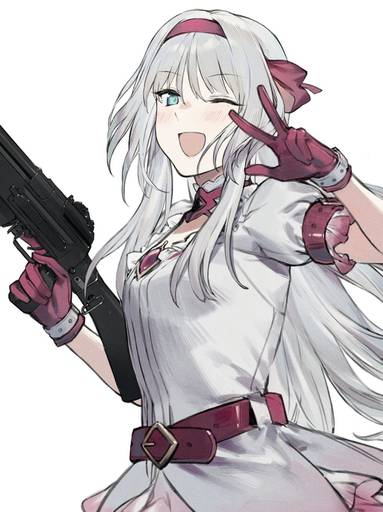 There are not enough ways to say "use her if you have her." I want to make a joke, but its hard to overeemphasize just how good she is. Besides her immensely good uptime (5/8 type), it's raised even HIGHER by her passive, which triggers it everytime she switches targets. In most cases, she will pretty much outperform G11 handily.

Basically the best of the best among daylight ARs, and powerful even at night vs up to light armour. She wants the #7 position on your formation, and there's little reason not to give it. Also she has enough of an Acc Buff that everyone who used to do stupid shit to prop up SR3 can be quiet now, it's all the buff you need to run her.

A 5/8 Up time with 200% damage means that, over a duration of 16 seconds, she has an advantage over G11, who has a 4.5/16 uptime with 300% damage. G11 still sports the better burst, but not by that much with AN-94's mostly better stats and passive. Note that her passive is not really taken into account in simulators, so you can't get her full performance there.

Also she has 67 ACC. Because we needed that, apparently. Useful at night when you have non-maxed night vision. Useful agaisnt scouts with a single 50% ACC tile (SAA/K5/other SMGs) bringing you to a whopping base 100 ACC (not counting fairies). If not for RFB, she would be the AR with the highest ACC, but unlike RFB, she doesn't lose out on ROF at all.