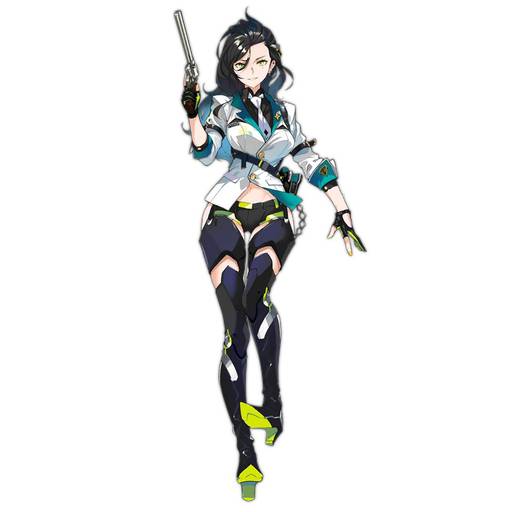 Forget what Clint Eastwood said, THIS is the most powerful handgun in the world. Somehow packing a .357 Magnum cartridge that deals more damage than .50BMG or whatever the hell Contender is in. Python is a ridiculous handgun that with the right formations, does absolutely disgusting things to the game. She needs her skill at lvl10 to be reliable, but oh boy when it does.

Besides being a handgun with actual DPS (that can get really high), she also acts a buff booster, applying stacking buffs of her own whenever she receives a buff from almost any source, giving them to herself and anyone in her buff tiles. When she gets a RoF buff, she gives a RoF buff. When she gets an Acc buff, she gives an Acc buff. When she gives an FP buff, she too gives FP buffs. And that's just the passive. Her active gives her a stacking self FP buff and counts among "almost any other source", so yeah, triggering it ALSO gives FP buffs to everyone else.

This, on top of amazing buff tiles basically gives her ridiculous performance for a handgun. Just don't think she's some allmighty goddess of doom that wins on her own. What she is is an insane force multiplier when used right, and you need some force to multiply to begin with. Used wisely though, easily 1 of the best HGs in the game.

I said "almost any source" because a couple of buffs specifically do NOT trigger Python, such as Freiyja & Carmilla from DJmax. Also the the amount she buffs others by is fixed according to skill level and completely independent of the actual buff itself. Hence, get it to level 10. There's also that the selfbuff is mildly RNG-dependent until then, so yeah, max that shit.

And of course, all the buff stacks are multiplicative, giving her a hilarious 574.88% Firepower when all her buffs are going, BEFORE outside sources. This is how she is able to deal so much damage as a handgun.