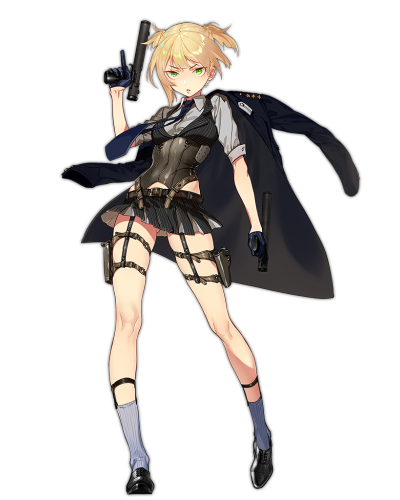 MANNERS MAKETH MAN. Very good aura for DPS, and very widely used. As a bonus, she has a very good skill for tanking, and can actually be used as a tank for bamboo spear formations or helping other tanks. She has 40% base crit unlike other handguns (a trait shared with other single-shot pistols like Contender and Thunder .50. Thunder isnt out yet on EN.) so a suppressor is actually pretty beneficial on her, not that you have other much choice in the matter. But yes, you will be finding use for her. Note that her -acc skill does stack MULTIPLICATIVELY with Makarov.

Gives a ACC debuff that is equivalent to a 81.8% EVA buff to your units.

That being said, EVA is still a stat that is pretty hard to quantify, and it's impact varies from fight to fight. She is often suggested to use in early RFHG echelons because you often really don't have anyone else better to use. Extra FP doesn't help the RF HGs much when it doesn't help them reach a new breakpoint (which is hard to quantify) and the standard early-game RF echelons have cap/near cap ROF anyways (ROF RF echelons with M950A, FP RF echelons with M950A + Stechkin).

Additionally, RF fights tend to last more than 6 seconds (because that's how long it takes for HGs to get online). Add the fact that RFs target enemies at back, means that your HGs tend to need to tank something, so the extra EVA helps that.

One thing often unmentioned is that she can be in position 4 or 5 as well, as she gives relatively good stats for your RFs at those positions. The reason for that is because the other HGs are less versatile. Grizzly cannot be used on position 8, and provides EVA buffs to another HG in both position 4 and 5. M950A can only stand in position 5. Stechkin and Five seven can only be in position 4.

But if you are using K5 and SAA or any non-ROF-tile budget HGs, Welrod can sit in position 4 or 5 to provide better tiles to your RF. Just make sure you know the maths and run it before doing so.

Best in her line, except agaisnt P08 at night. If you have her and plan to use her (in any way i mentioned or any revolutionary way you think of), don't bother with anyone else down the line unless if you plan to build the EVA meme team.