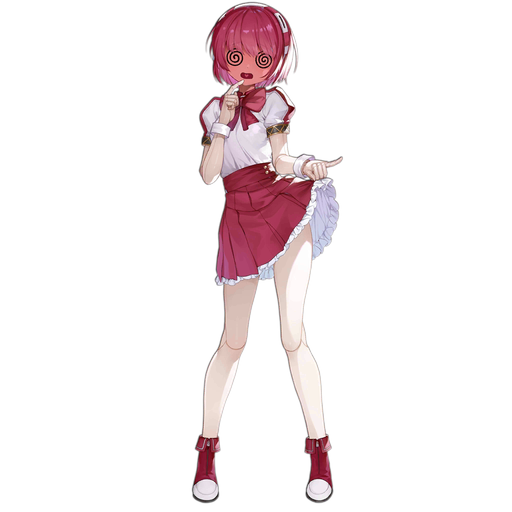 Yes I know that's not really her name. And yes, you'd think the unit whose hands are actual guns would be a handgun, but nope, she's an SMG. MICAAAAAAAA. Anyway out of everyone, probably the most immediately useful on EN because of what EN faces.

She has a pretty interesting skill that reminds some of C-MS. What it is is mildly more complicated, because it comes with good AND bad sides, and allows her to be both a main tank and an off tank. As an off tank, she provides decent firepower with 100% uptime, a debuff no one cares about (-acc) and a really nice buff (constant eva up!) for the main tank, while as a main tank she has permanent Eva up, buffs acc of the same column ("vertical row") but actually makes the off tanks (or just people in the same column) a little less survivable. Skill discussed in more detail in her entry, but its fun stuff.

A problem she has though is the shape of the tiles. That lacking middle row really gets in the way, but she has enough other uses that this isn't too awful if you know what you're doing (For example, you want to buff the everloving bajeezus out of your main tank's dodge instead).

Also she buffs Rifles with her tiles too too, but this doesn't seem to come up all that much.

So what's complicated? Well in both modes she buffs everyone in the same column by 80% to 1 stat, and debuffs them by 40% for another stat. In MIIRD113 mode, its buffing Evade (Yay for your tank) and reducing Accuracy (no one cares, your SMGs have shit acc anyway). In nanocamo mode, its the opposite, which is a huge buff for any direct fire SMGs but also makes them more vulnerable.

Also the uptime is, despite us saying they're permanent, not ACTUALLY 100%. How it works is that the skill ticks off every second and applies the appropriate one, so if a unit moves out of range (or you move Dorothy out of range), then they cease to be affected by the next second. This is both good (you dont get any lingering effects you don't want) and bad (you don't keep any you might want either!). Also, due to how skills work, this is only projected when Dorothy is standing still, so if she's moving (such as a run up to a boss or evading mechanics), it turns off 1s after she starts, and it remains off until she stops, then comes back online a second later.

Also, her unique equipment has 7 more firepower than a normal HP ammo, and her FP stat isn't bad to begin with, so she actually can do more damage than you might expect, especially with having +100% FP whenever she fires while using MIIRD113.

Oh and using a Piano Woman with Jill reduces the debuff part of her skill by half, which you may as well use if they're together anyway unless you have something else in mind.

When used as an Off-tank with oathed CMS, CMS can get a permenent 348.975 EVA. If you put her with an Evasion 2 Reinforcement fairy, you can get 787.28 EVA. She will then have permenent 1000 EVA if you get 28% EVA from tiles. Don't blindly follow this, although you may find situations where parts of this idea is good. Remember that you need to keep Dorothy alive for this to work well, and you can't move Dorothy much.

She also buffs RFs, for that matter. This means that if you need some bulk in your RFHG, you only need to sacrifice your HG skill instead of both the HG skill and tiles in exchange for the massive bulk you get from using a SMG, and Dorothy is a damn good SMG. It is, again, not always the best choice, but a better one in some situations.