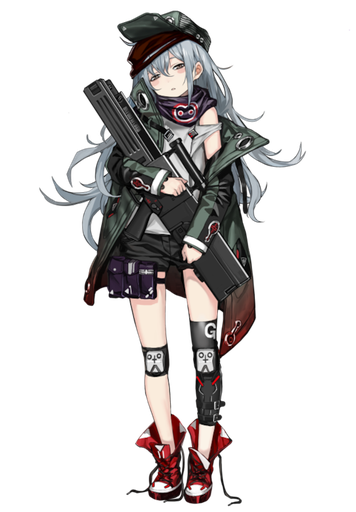 The most German unit in the game, in that she is both exceptionally lazy and surprisingly good at her job whenever she can be bothered. The source of 90% of HK416's misfortune. Zombie movie afficionado, and owns all 26 seasons of The Flying Dead (Im not making this up.) Originally one of the most broken ARs in the game until digimind evolution and team DEFY showed up. First member of Club "MGs who pretend to be ARs." Max out her skill, point and laugh as she destroys everything. Skill has poor uptime which makes her worse than AN94 in 90% of situations (and arguably worse than STAR Mod3), but still pretty good.

With her skill active, she is affected by armor 3 times, because she fires 3 shots. Also has extremely good base stats, having about 20 ROF over the average AR ROF with around 10 FP loss.

Her skill has a terrible uptime, making her not-as-good as other ARs against bosses with phases.