Assault Rifles And You

Assault rifle/SMG formations aren't just your bread and butter, but also half the toppings. You're going to use them a lot.

Similar to most rifles, they provide steady DPS, not burst damage like MGs. (This makes absolutely no sense if you look at IRL guns, but that's MICA for you.) At the same time, you have more weird specialized ARs compared to other classes:

These are similar to their rifle counterparts, briefly boosting their stats when their skill is active. Unfortunately for most of them, MICA in their infinite wisdom gave a lot of them fucking useless buffs – accuracy self-buffs e.g. are never actually useful. Those that self-buff RoF or DMG are, however, excellent and should be your first choice for damage dealers.

Grenadiers come in two variants: Completely useless, and not entirely useless. While their skills sound impressive on paper, they tend to have a high initial cooldown, and have lower stats, making them completely useless unless the fight is long enough that their skill can trigger… and if it does trigger, it needs to hit a large amount of enemies to make up for their low DPS. Since you can't actually aim the grenade, this can be difficult. (And used to be even more difficult, until the October 2018 update grenades were bugged and could glitch out, dealing zero damage.) Due to these problems, there's only a few grenadiers on EN that are worth considering:

Even with those, you'll generally only want to deploy one of them per echelon, since their grenades are too limited in utility. Sole exception is defense drill, levels 95-99 are annoying enough that you can end up deploying two or three of them. Fuck scouts.

Buffing ARs give buffs to other ARs, replacing HGs for day battles. Your options are M4A1, who happens to be both a self-buffing AR with high DPS and a good buffer, Ribeyrolles, a pure buffer, and if you participated in the Black Danube event, AUG, a fucking weirdo.

Between the three, you can pretty much flip a coin – they're all viable. M4A1 is a good DPS on her own (and her damage self-buff makes her better at fighting armoured enemies), AUG buffs your damage dealing SMGs as well as your ARs (and her targeting can sometimes be interesting), while Ribey is best at buffing other dolls (and her skill can buff non-ARs too). However, sincedolls must stand in Ribey's tiles for her skill buff to work, she can drop off significantly in boss fights where AoE dodging is required.

That said, even lacking spare buffing ARs, ARSMG echelons tend to be better off with a third DPS AR, rather than a buffing HG, unless you happen to have spare Grizzlies, K5s or Stechkins. And quite a few ARs have skill cooldowns of just 2 or 4 seconds, letting them frontload damage much faster than HG buffed echelons could.

That leaves the oddball of Team AR, M16A1. She's actually a pure tank, not a damage dealer. She does less damage than most SMGs, and is a weird mix of evasion- and armour tank, and her stun grenade doesn't work in boss fights. For now, she'll mostly see use in corpse dragging. Later content will make her more useful, as we will eventually get enemies built around her evasion+armour combo.

Being in the front row, SMGs will need to tank for your ARs, with most of the damage concentrating on the central SMG. Due to this, most SMGs are defensive tanks (see below); whether you want two proper tanks, or a main tank (in the centre) and a damage dealing SMG in the off tank position largely depends on what you're fighting – most enemy formations are better "tanked" by murdering them faster, but tougher enemies can require two tanks to let your echelon survive long enough to kill them.

These are the most versatile – their skills tend to proc relatively early in the battle and they work even against bosses. Despite their versatility, most of them suffer from "but UMP45 exists": UMP45 is about the best SMG tank you can ask for (and will stay that way, thanks to her mod3), and tends to drop often enough that you can dupe her. RO635 is the biggest exception: Not only is she a free story drop, but being a hydrid evasion+debuff tank, she fills a different niche than UMP45. You can also use both together, if you really need an enemy suppressed.

They rely on their flashbang to temporarily disable the enemy. On paper, this is even better than just debuffing them, but it doesn't work against bosses. Still a good choice for a secondary echelon to take care of everything else, especially later in the game where non-boss enemies start getting ridiculous too. UMP9 is relatively easy to get and decent, but Type 79 is a straight upgrade if you manage to get your hands on her. M16A1 is a hybrid stun+armour+evasion tank too, so you might not need to use an SMG for this early in the game.

Evasion tanks rely on self buffs to make themselves harder to hit. This makes them more reliant on equip and skills than other tanks, and vulnerable to high-accuracy Jäger as well as undodgeable boss attacks. While not quite as useful as stun or debuff tanks in general-purpose echelons, some bosses do want to be tanked by them (Dreamer!), so it won't hurt to have at least one of them levelled.

Yet another niche: Their skill doesn't proc until 8 seconds into the battle and only lasts another 4, which makes them vulnerable for most of all battles, no matter if they're short or long. This makes them rather situational tanks, but sometimes, you really need to skip one particular enemy attack. G36c is the best overall shield tank, but sometimes, you want Thompson's higher HP pool instead.

For general purpose echelons, they're kinda meh – they can face tank well enough, but face tanking really should be your last resort unless you're swimming in quick repairs, especially as the latter won't work for S ranking maps, or event ranking. MP5 with her unique gear is the least bad at it, being a hybrid evasion-shield tank, but why bother when you could be using an UMP instead?

Not many choices here, but which you want depends on what you're fighting:

Ideally, you'll want some of both levelled to cover all your bases.

For the most part, you will deploy them in F-shape formations of 3 ARs (back row) and 2 SMGs (front row). First choice for the back row are the story ARs (excluding M16A1) – they're an excellent all-rounder formation, and you get them for free. Since RO635 drops rather late, your first choice for a main tank should be UMP45 – she's a relatively common construction, and just too good to pass up on. For off tanks, you can choose between another tank or damage dealer SMG; the free Skorpions you get early in the game are serviceable enough to keep one of them around until you get SR-3MP or Vector: 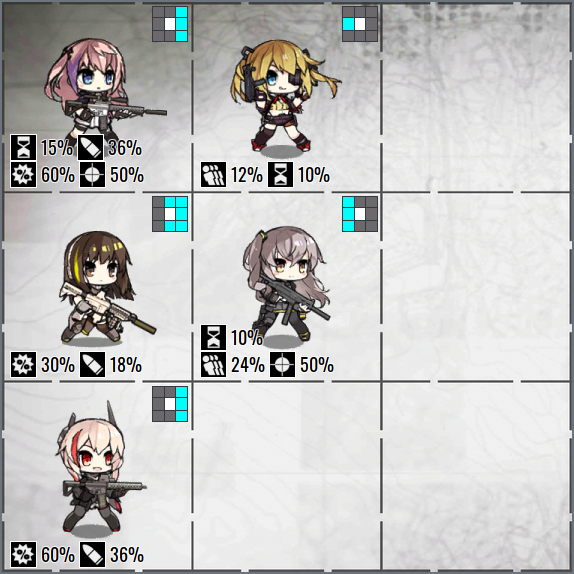 However, depending on what you're fighting, you might want to replace Skorpion with another tanking SMG like UMP9 (or M16A1), since she's rather squishy: 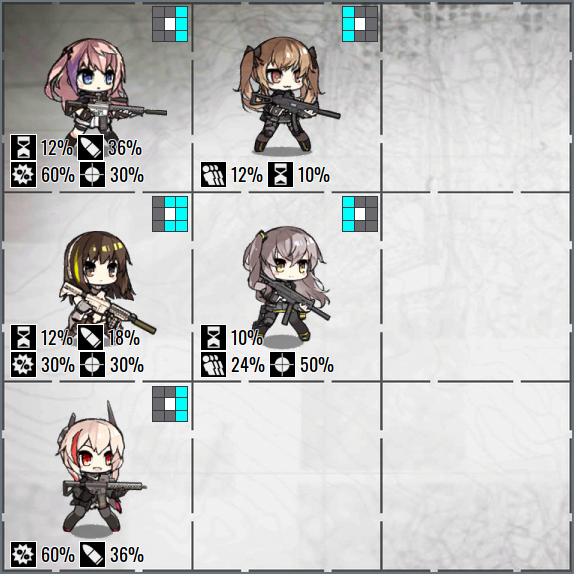 …and you'll definitely want to replace her with a better damage dealer (Vector, usually) ASAP.

For secondary echelons, we have a bunch of options: G11 and AUG are excellent, and you want any two of 416, FAL, SOPMOD and G11 for corpse dragging. Other decent ARs are starting to trickle down to EN as well, so check the doll pages for whoever you rolled.

A special case are night battles: They need a handgun to provide map sight, and you will run into armoured enemies. While rifles are the recommended way to deal with them, FP-buffing ARs can handle lightly armoured enemies, if they have enough buffs and equipment and skill levels. You want ARs around regardless to deal with unarmoured enemies, especially scouts. Molotovs and grenadier ARs are especially handy here, since they ignore both armour and evasion.

As such, in the early game, your best bet is probably an F formation with a rifle in the back, 2 ARs (one grenadier, preferably, to deal with scouts and armour), a damage-buffing HG (to better handle armour), and one tanking SMG up front: 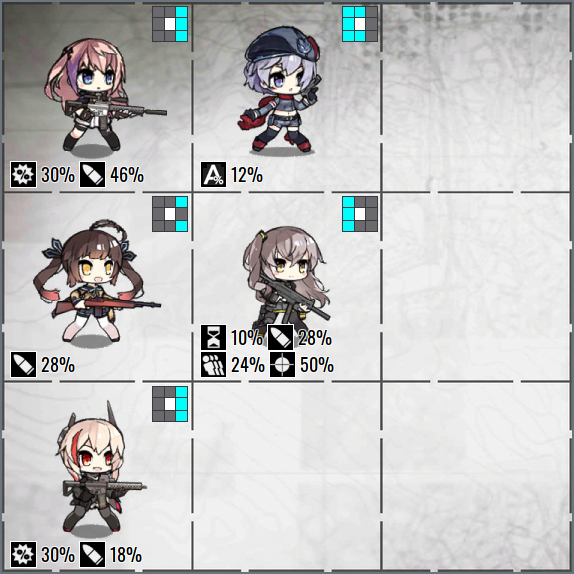 This will work for the first few chapters, but having just one real tank to take all the damage will quickly become unviable in later chapters. It's also suboptimal because the rifle will be mostly useless in fights involving evasive enemies.

Starting with 4N or so, you'll want the night royalty (or other good FP-buffing ARs) for the ARs, and the rifle replaced with a molotov SMG: 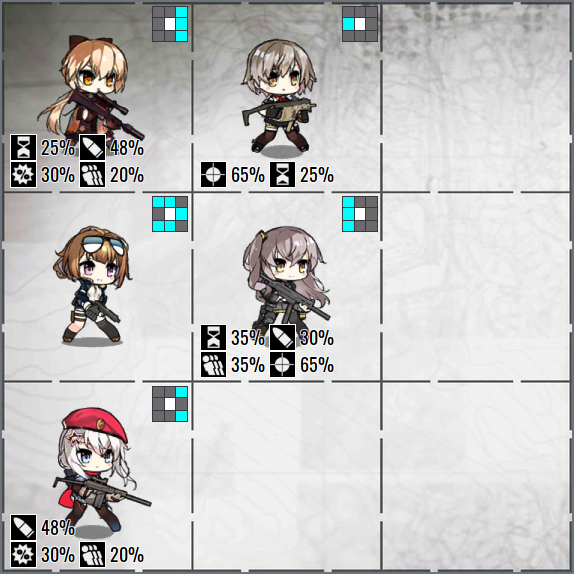 This gives you decent DPS against both armoured and scout formations, while having two SMGs lets you spread damage better, making tanking much easier. It's still recommended to invest into at least one rifle echelon, they're much better at dealing with armour regardless.