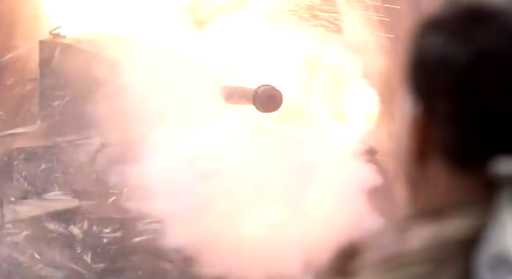 Basically when she pops smoke, she then goes Alvin York and blasts away 7 times for extra damage, hitting the farthest enemy and working her way closer to the front with every shot. If there are no closer enemies, she just keeps shooting that one until someone else has gotten closer (either because its dead and thus a new thing is closer, or something ran ahead of it).

Note that while the skill has an ICD of 1 second, she doesn't actually start blasting away until 3 seconds in due to the throw animation.

She's actually usable in 10-4E due to being good enough to clear the cyclops swarm in front of the manticores, leading to cheap (resource wise) farming. She eventually gets replaced by deagle for this, but she remains the only HG to have a smoke grenade. YMMV.

Has a better smoke as a 4*, and there's more reason to upgrade her base skill if you're using her already. Her pretty good base tiles have improved a little more, but the lack of an HG buff still means that in many cases, it's still hard for her to compete with the strong buffer HGs, especially with her own relatively low stats.

Still, sometimes you need an HG and a smoke grenade, perhaps on your RF team, and she'll do the smoke and something extra. Although this time she doesn't come cheap. And she does find some additional use from time to time when the numbers work out her way.

If you decide to go for her, definitely do this after M4A1, AR-15 and probably M14, though, unless if you REALLY want something for 10-4E grinding before M4A1 comes, or you want something cheaper even after M4A1 is around. Also, you can bring an additional 3rd unit to grind while you're at it since you only have 2 and you can have 3 relatively safely.