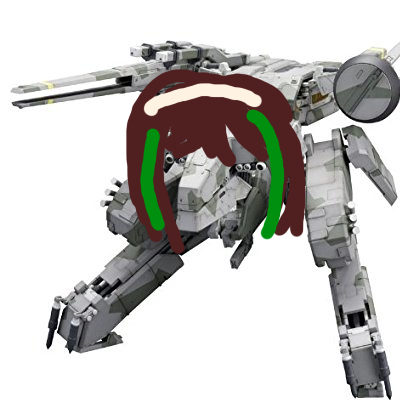 After literally years, M4 demonstrates WHY SHE IS THE HEROINE and becomes METAL GEAR.

She keeps all her old benefits but has 5 star multipliers and better stats now. This gets even better when Mod3 when she gets a unique that ups her firepower and ALSO gives her armour, so she can kinda tank in a pinch. Her buff tiles are ALSO slightly improved. Her mod 2 skill also tags enemies and enhances the mod skills of other Anti-Rain units.

The big thing however is the desperation mode. At mod2 onward, when 3 or fewer allied dolls are in battle (you can retreat 2 units to force this, or simply deploy her with a partial strength echelon), she pulls out the portable cannon and proceeds to deal hilarious damage that makes grenadiers wet their pants, as huge AoE blasts firing from every dummy. The blasts are kinda 100% accurate (the main hit can never miss, even at night, but the splash damage can. Its weird), and can partly crit (its complicated), and is meant to be a last ditch thing to save a fight under dire circumstances (of course, we instead abuse it). This is however, a doubled edged sword, as her RoF also goes down, so its possible for some enemies to slip by if you havent taken this into account.

Basically, Mod her first. She's pretty much priority #1 for modding.

Here's a PD negev video showing just how powerful her railgun is.

As long as you're reasonably responsible with it, it is an immensely powerful tool in your arsenal that can be used to pull off crazy strats. Use your imagination.

One MAJOR thing to note is that the activation of desperation mode is checked ON USE of her first skill, rather than in realtime, so if you lose 2 units in the middle of the skill, she doesn't suddenly whip out the cannon. Plan accordingly. It also has a whole bunch of other quirks but Dusk will discuss them instead of me because he's better at explaining math things.

Her only weakness is that you only have one of her, unless if you are among the old server players that have more than one copy. Each doll is a tool on your toolkit, but if there is a unit closest to the universal tool, this one is the one.

Her 2nd skill attack is a basic attack with an AOE, dealing one hit per enemy group per M4 dummy link (An enemy with 5 links does not take 25 hits). However, do note that the splash explosion is only a 175% FP attack, and is not a 100% splash damage attack based on her original hit damage. (a.k.a not 1050% splash attack) The original hit (applied only to her direct target) cannot crit, but cannot miss. The splash damage CAN crit, but CAN miss.

Just note that sometimes you DO need the extra hits from the extra attacks, and sometimes the AOE isn't helpful, and forcing yourself into skill 2 means that you will only have 3 units left on the map until the fight ends, so don't stupidly go into skill 2 without thinking. Do it case by case.