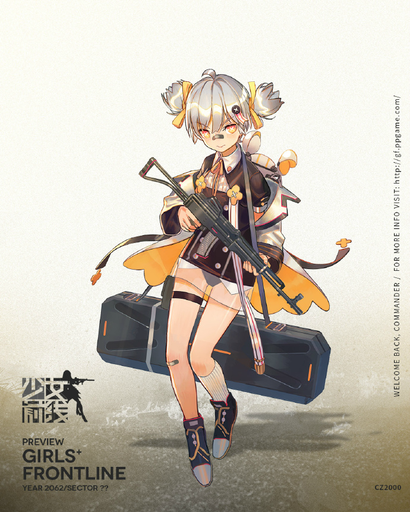 A doll that was forgotten for so long I couldn't find a cleaned up version of her image outside of moegirl.

Her skill does different things depending on whether its a day or night battle. Crit and Damage during the day, Hit and RoF at night.

She's not actually bad, just that she's not exactly overwhelming good, so she just... kinda exists?

And then Shattered Connexion happened and she was helpful against a certain enemy type, but that's far in the future. For now, eh... raise or don't raise, whatever, you'll be fine either way.

She actually self-caps RoF at night so you dont need to bother giving her RoF buffs. Her crit% boost is alright if you arent capped out during the day.

Theoretically pretty good. The day version of the skill is somewhat better than the standard FP AR buffs (with 5% less FP compared to G36, but 25% more crit rate), and the night version of the skill gives her cap ROF and some additional ACC. Of course, she is still a 4* and has lower stats than many of the good ARs (with their 5* baseline stats)

But her major issue is that she comes far too late into the game, right when units like M4 MOD, AR-15 MOD, AK12 and AN94 comes along, making her relatively good skill (with a somewhat below average statline) pretty invisible in comparison. She just doesn't stand out compared to everything else, especially the more specialist ARs that may find some niche use over the top tiers.

That said, she IS pretty decent, so she's still a pretty serviceable AR if you want to use her.