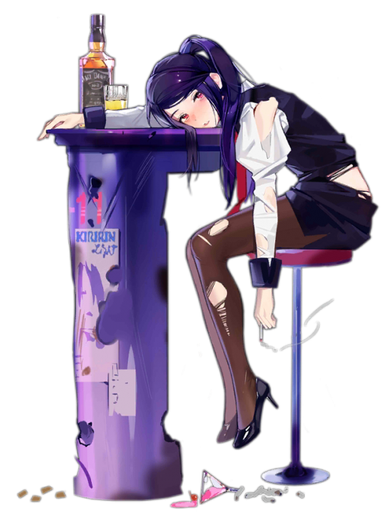 It's time to mix drinks and change formations. As a bartender, one might wonder exactly WHAT Jill can possibly do on a battlefield, and I'm sure she's asking the same thing.

Jill has a lot of firsts. She's the first unit in the game a player can use that doesn't shoot at all. She's the first one to have 8 different unique gears, and she's the first one to have a skill whose effects vary based on equipment. She's also the first one to have such an annoyingly complicated skill. The skill is everything. Her tile buffs are great, but they HAVE to be, because she doesn't contribute damage on her own. What her FP stat does is make her skill CD go down faster (except initial. Also caps at 30%, but this is INDEPENDENT of the reduction from rifle tilebuffs so yes, THOSE stack. Multiplicatively.). Unfortunately this means while she's good, how good she is depends almost entirely on how much you can use her ability to mix drinks, which btw, she can't do properly until lvl80.

Drinks are discussed in more detail in the detail page, because this is gonna be a long one.

And yes, this does mean Jill cant actually mix drinks that aren't a sugar rush until lvl80. So great, you have a drinktionary, what does any of this mean? The skill description already covers the basics of all this (and frankly also provides a drinktionary but shush), so let's instead talk about HOW to use these.

First off it takes Jill 3 seconds to mix a drink AFTER the skill is activated. While this is damned fast in the world of bartending, its a little long in the heat of battle (props for being able to mix drinks under fire though). This does mean that besides her initial CD, you also have to account for the time she has to spend mixing. If a fight is shorter than this, well, all she has are her buff tiles. They're nice buff tiles, but she also doesn't shoot, so YMMV. EN server of course has the problem that frankly, most enemies are chumps who won't live very long. This gets better as enemy HP inflation starts kicking in. The second problem is that while she's mixing? You can't order her to move. She will cooly keep mixing until either the drink is done or she is dead, whichever comes first, so do take note of that.

If you CAN meet these conditions however, she can provide some very interesting buffs depending on your setup. Oh, and do remember that some of the skills have limits on what doll types it affects, so dont mix a Brandtini hoping it'll buff your ARs.

We'll be discussing the drinks in turn, but out of all the drinks, the one that really stands out is the Bleeding Jane, so we'll start with that… after some more notes.

Because of Link Protection, Jill not shooting can be bad sometimes. It is hard to notice/point out, but there are occasionally times where your HG cleans up enemies with a few links, or does small damage to allow your units to kill an enemy.

Also, Jill can get permenent uptime with max stats (30 base FP) and 30% CD reduction tiles from RFs.

This may or may not be useful, since you are forced to bring 2 RFs and not all RFs have good formations for this specifically. Additionally, it does not reduce the initial cast time by much (she gets her 1st brew at 7.2 seconds instead of 9 seconds), which means that it requires a longer battle before it is really worth it.

However, if you can manage it without losing out on anything else, go for it. I mean, you can line that up with R93 + M14, and you don't lose anything with that lineup... Most standard RF lineups don't give you that, though. WASVD doesn't, LeeM14 doesn't, LeeG28 does, though. That being said, getting 2 RF buffs isn't that much better than 1 RF buff, and getting that doesn't even require much thought. If you can get a 18% CD reduction, her uptime is 8/9.184, which is about 87%.

For that matter, without any RF tiles, her cooldown is 11.2s, giving her better average uptime than most HGs.

At lvl10 skill, it gives you +25% Crit (okay) and then converts 60% of any Crit chance in excess of 100% to a Crit Damage multiplier. Well okay, so whats the big deal? Most people expecting a sane interpretation think it just makes use of whatever extra Jill gives. MICA, not wanting anything to do with sanity, decided it will take ANY AND ALL crit multiplier the unit might have over 100%, from ALL SOURCES. So fury fairy, crit skill buffs, fairy crit buff, 5-7's buffs, everything. Total your overall crit chance, and apply that as a completely new multiplier for crit damage, and presto. It's about 642.25% Crit Power on older servers (EN will see less due to lack of Python) for generic rifles with capes on. Rifles with their own crit multipliers (like Stella or M14Mod3) can make the number go even higher. Even just WA2k is capable of over 6k damage a shot, completely reducing 300k+ HP bosses to scrap in so many seconds.

Unfortunately it's only superbusted on rifles - ARs mostly arent as bonkers due to their formations.

Big Beer gives SGs a tiny bit of armor boost. That's all. The FP and ACC boost is not relevant to SGs in most situations, unless if you want to build around it, which then this is not for you. The issue is that this armor boost is extremely weak, and comes very late. With the initial cast time, if the 20% armor was relevant to reducing your damage to 1, you would have taken at least 4 seconds and up to 9 seconds of attacks (depending on how good your MGs are at clearing the wave), and your SGs would have taken far too much damage.

Furthermore, this is overshadowed by better HG skills like Glock 17, Nagant Revolver and TEC-9, because of maths.

In EN Daytime (at the time of writing), you can use Nagant Revolver and Glock-17 to reduce an enemy's damage by 15%, which gives you an equivalent armor of 76.4 armor. An enemy with such FP will have their damage reduced to 64.96, and hence receive no damage. This is, however, the only case which Jill wins out (Using Jill over Nagant Revolver)

In EN Night (at the time of writing), you can use Nagant Revolver and Glock-17 to reduce an enemy's damage by 25%, which gives you an equivalent armor of 86.62.

At old server Daytime, Nagant Revolver MOD3 and Glock-17 can reduce an enemy's damage by 25%, which gives you an equivalent armor of 86.62.

At old server Night, Nagant Revolver MOD3 and TEC-9 can reduce an enemy's damage by 40%,  giving you an equivalent armor of 108.28.

As for using Jill alone with 2 RFs, you have to sacrifice a 15% armor tile, meaning that the best you can do with Jill alone is to get KSG to 69.3 permenent armor.

For this role, Jill is the 4th choice in the list for armor stacking, as everyone else simply does the job better (and more reliably as the timing Jill starts brewing matters, unlike the other HGs). However, if there will be a case where having permanent 69.3 armor is enough, or having 77.96 armor is enough (with another HG), the tiles she provides may be better than the other HG options.

Brandini is decent for 2nd Salvo MGs, and outside of 2nd Salvo, she is definitely better than K5 (providing 10% more FP tiles at no loss). At 2nd salvo, K5 provides 80% ACC (for the whole salvo if you control K5's timing, part of it if you don't as K5 activates her skill right when MGs start to reload) while Jill applies 25% FP and ACC. Which to use is will then depend on which stat is more important, but more often than not, Jill is better here, even if not massively.

Piano Woman makes Jill K5, but slightly better in some ways and slightly worse in others.

Instead of 22% FP, Piano Woman only gives 20%, but that is covered from the 40% tiles Jill has over K5's 30%. Additionally, she gives 60% EVA over K5's 40% EVA, while also applying the buff to your position 8 HG, and to herself if she is in the front row. It also doesn't have the restriction on how the buff is applied other than the positions of your units, which means that it can buff DPS SMGs or 5HG lineups.

There isn't much to say or compare other than the timings and cooldowns of the skill. If it comes out at a good timing, it's a good drink. If it doesn't/wouldn't, other units (like K5) would do better. And if the fight lasts extremely long, her slightly better uptime and her lack of requirement on where she is standing would be better, as long as the fact that she cannot move while brewing doesn't kill her first.

Also, it checks your units' position in-battle, not outside of battle. If she procs her skill right when you have a DPS in the front-most (to dodge something) then too bad. 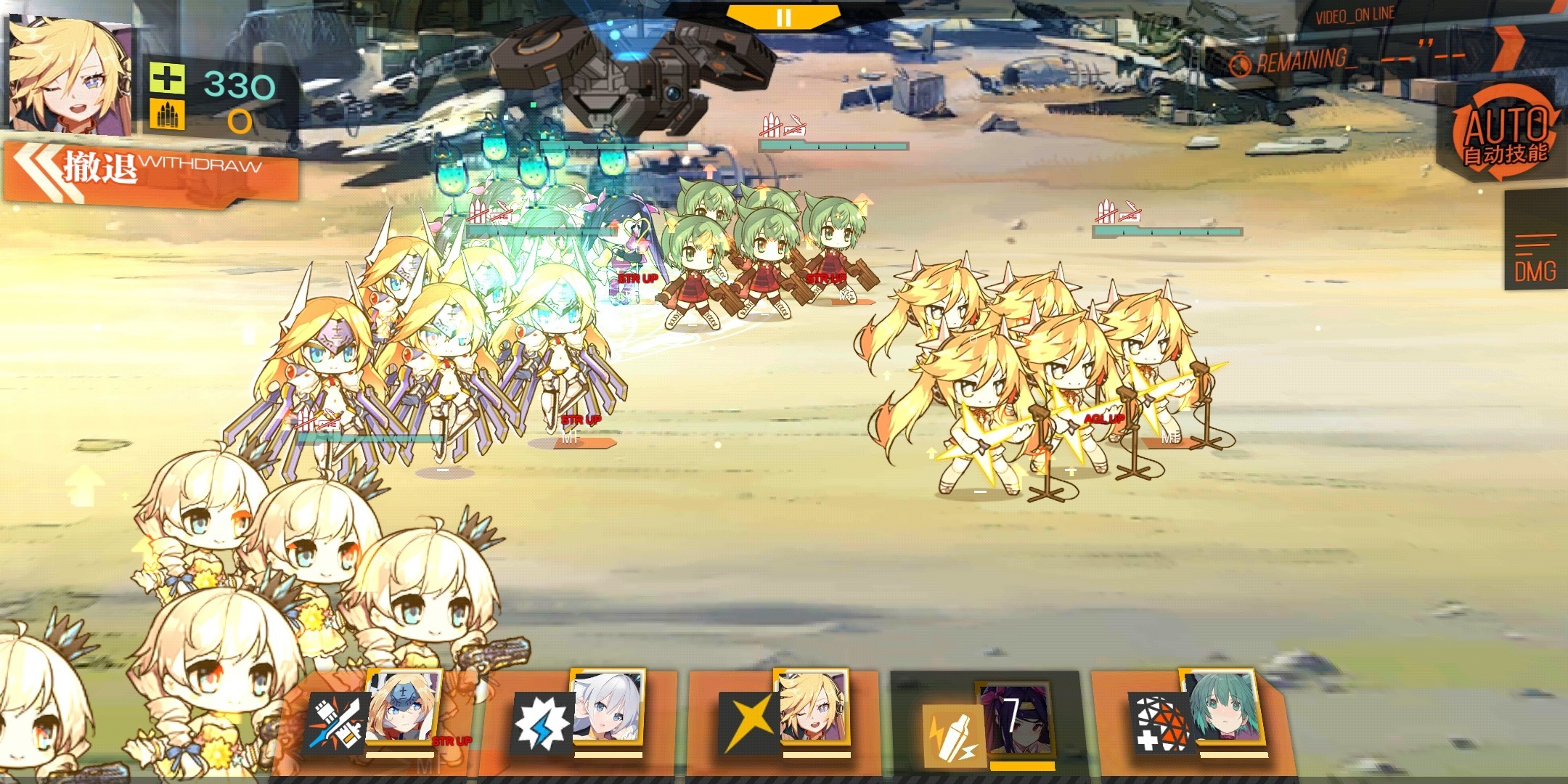 The issue with Moonblast is basically that any time Moonblast is useful, Bleeding Jane usually is as well, and Bleeding Jane simply blasts Moonblast out of the water. Theoretically, Moonblast can be good in AR echelons as well, as often ARs can usually use the full ROF boost, while other ROF buffers (like Stechkin/Five seven) usually cap out their ROF.

A 22% ROF boost means that an AR with 15% ROF boost (from something like MP7 and Suomi) needs to have 84.05 ROF before reaching cap.
The main time it will be useful is if you intend to use Sei's shield AND plan on being defensive. This drink basically makes Sei's shield the highest HP shield you can get in normal use - which is useful if you can get it out in time.

However, it still suffers from the issue of having 9s (or 7.something if you're using an RF and have it in range) ICD, so you need to get past that before she is even viable.

Justifying whether Fringe Weaver is good or bad is a maths heavy task. Even when used blindly, it can be either better or worse than Grizzly depending on the type of skill of your units.

Do the maths yourself if you want, but if G41 does N damage per second, G41 will do 32.5N damage with Grizzly and 34.39N damage with Fringe Weaver. The difference really isn't that large, and if the battle ends between 9 and 11 seconds or at 17 seconds you don't even get a bonus. You can try guessing yourself how likely battles are going to end at that timing because I have no clue myself. Furthermore, this does not consider that damage per second is very inaccurate way to calculate effectiveness, as units do not fire the same number of attacks every second unless if their ROF works out, and it does not consider overkilling and link protection.

Also sometimes good for MGs if you can time it well such that the skill is always active when the MG is reloading, and even then it's a 2nd salvo skill, and Brandini might do better anyways.

However, even when the timing matches up, the advantage is honestly not big, and when it doesn't, you tend to lose damage. Because of how volatile it is, it really isn't advised unless if you are drunk enough to not care about minor details, or drunk enough to work out everything such that Fringe Weaver is good.

Kind of awful, being worse than just bringing Grizzly or Mk23. It's also worse than Piano Woman.